The five nursing students and one midwifery student were representing Bangor University at the 50th Annual Florence Nightingale Commemoration Service, where the focus was on representatives from the Welsh student nursing cohort. 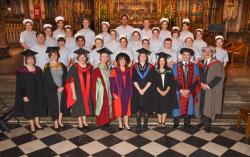 Around 2000 people including national and international dignitaries and members of the armed forces, were present to celebrate the Nursing and Midwifery professions, honour those nurses who died in the service of others and commemorate the life and legacy of Florence Nightingale. The service also provides a showcase for future generations of Nurses and Midwives.

“We are grateful to Professor Jean White, Chief Nursing Officer for Wales and a Trustee of the Foundation. Professor White is an Honorary Fellow of Bangor University and was instrumental in ensuring that it was Welsh student nurses that led the procession this year. We are delighted that our students have been among those chosen to represent the country and their future professions.”

“When I left school I studied physics and then worked in medical physics, MR imaging in particular.  However, I realised that I wanted to work more closely with people, and I 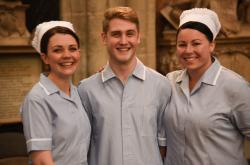 took the rather daunting step of leaving the medical physics world and starting a job supporting adults with autism and learning disabilities.  It was the best decision of my life!  I loved it and I met so many wonderful people.  I chose to go into Learning Disabilities nursing as I wanted to do more to support people with learning disabilities, and to reduce the inequalities they face in accessing healthcare, so that each of us can lead the life we choose, and live it as fully as we are able. “

Also selected to attend was second year child nursing student Katie Healey. Prior to starting her degree course, 25 year old Katie worked as a teaching assistant in a primary school and was training to become a teacher. She decided to change track, however and, having undertaken an access course in health and caring, was accepted to study at the School of Healthcare Sciences.

“I felt very privileged to take part in the Florence Nightingale Commemoration Service in London to represent Bangor University. It was a momentous day that I was proud to be part of, the first time Bangor has been involved. I am looking forward to qualifying next year and to see where my career will take me,” she said.

“Since starting the course, I have been involved in peer guiding and the 1000+ lives chapter. I am also the child field representative for all three cohorts and attend many meetings and conferences to relay messages from my colleagues. Currently, along with a small group of nursing students from the four different fields of nursing, we are in the process of setting up Bangor University Student Nursing Society.” 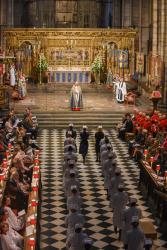 “I am extremely passionate about people and the importance of mental health, which led me to the course in the hope of improving people's mental health. My ambitions are not with a specific field as yet, but in becoming a competent practitioner who is empathic and knowledgeable in whatever environment I work in when I qualify, using my own personal qualities and best practice to improve people's lives.”

Jonathan Cliffe, recently shortlisted for a Student Nursing Times Award, was also at the ceremony reflected on how his midwifery course has impacted on his life:

"Prior to commencing the course, I had the privilege of serving people their sandwiches' in a restaurant, now I have the privileged of being at formation of special memories, being with women as they give birth to their babies by supporting, advocating, listening and empowering them in their transition to motherhood, it is my ambition to become a midwife that proudly facilitates informed choice, practice evidence based care and to be an advocate for women during childbirth"