The School of Healthcare Sciences had a fantastic day as they descended onto the once peaceful but always beautiful Lake Padarn in Llanberis for the St. David’s Hospice Dragon boat challenge. A total of 22 teams entered the challenge which included two from Healthcare Sciences: one staff team and one student team. The boats raced in pairs and staff lined up against students, the banter had been built up over several weeks as intimidating pictures and videos of team members in training were exchanged on twitter so the stakes were high. Both teams rowed hard and, although the staff team came out on top,  less than ½ a second separated them from the students. 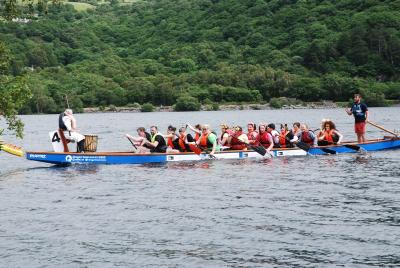 So far they’ve raised about £1500 for St. David’s Hospice who provide free specialist palliative and end of life care in our community. In addition to the money the challenge enabled staff and students to engage outside of academia with purpose, passion, exercise and fun and was a wonderful team building exercise. The smiles throughout the day stood out as did the sportsmanship shown by the student team (dressed as Noah’s Ark) who on conceding defeat gave a round of applause and rowed to shore serenaded by a chorus of “the animals went in two by two, Hurrah! Hurrah!”

The School of Healthcare Sciences will continue to develop its relationship with St. David’s Hospice having recently appointed a partnership position in the ‘St. David’s Hospice Lectureship in Palliative and End of Life Care’, and looks forward to future engagement. The just giving link is open until the end of July for those who’d like to contribute: http://www.stdavidshospice.org.uk/event/dragonboatchallenge2017/ 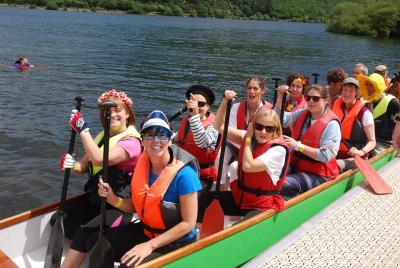 Staff Captain Benjamin Turton, the holder of the St. David’s Hospice Lectureship in Palliative and End of Life Care said “It
was a fantastic day and showed what is special about Bangor’s School of Healthcare Sciences namely the friendly, supportive atmosphere between staff and students and a desire to do what it takes to support healthcare in the local community, whether that is through our research, the performance of our graduates or through simply raising money. I hear plans are already underway for next year and I’m looking out for a trophy!”

Head of School Chris Burton added “ I’d like to offer my thanks to all those who have sponsored us and special thanks to those who took part, particularly 2nd year student nurse Teleri Roberts who organised the student team. Looking forward to next years rematch already!“