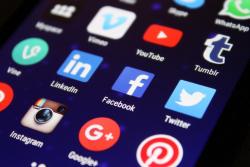 Welsh over 60s are online and actively engaging in social media, and this could be an important tool for public health.

77 out of every 100 people in Wales aged 16 years and above use one or more social media platforms. 65 in that hundred people use social media on a daily basis. These insights are from a new report: Population Health in a Digital Age: Patterns in the use of social media in Wales published by Public Health Wales and Bangor University today.

Identifying who uses social media enables Public Health Wales and other organisations to assess who would receive health messages via social media, and helps to identify which type of platform is best for different groups of people.

“It’s interesting that social media is often considered something for younger people, but the report’s findings have highlighted that a high proportion of those in the older age groups do engage with social media.”

The report used data collected in the 2018 Digital Technology and Health survey - a nationally representative survey with 1,252 residents in Wales aged 16 years and above. The survey included questions on access to the internet and/or digital technology, perceptions of sharing health-related information on social media, health status and demographics.

Interestingly, the proportion using social media overall were similar across deprivation groups, but levels of use of Twitter and WhatsApp were lower amongst the least affluent.

“We need to continue efforts to address inequalities in access, but recognise that social media may offer a platform to reach a wider audience and engage differently with populations about health.

“At present, health systems largely use social media as a channel to share information, but this approach does not capitalise the reason social media works - the networking element. Looking to the future, health systems need to learn how to engage in conversations on such platforms to support attentiveness and appeal with their audiences; to address beliefs, attitudes, intentions and behaviours for health.”

The Public Health Collaborating Unit (PHCU) in the School of Health Sciences is based on the Wrexham Campus and is funded by Public Health Wales. PHCU is an academic interface for Public Health Wales to conduct high-quality research which can be delivered rapidly and support the development of new research areas.