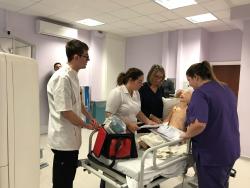 The child field and radiography lecturing team, along with Professor Debbie Roberts, designed a collaborative scenario to promote interprofessional working and communication, encourage clinical decision-making and bring an awareness of the different roles and team approaches in practice. The simulation required the child field students to take an acutely ill child to X-Ray. The simulation was designed to replicate clinical practice as closely as possible, but in a safe learning environment.

The child in the scenario was the high fidelity simulator Laerdal SimJunior, the child’s parents were played by members University staff and the simulator was controlled remotely by a member of the team. As the simulation progressed the child began to deteriorate and students had to work together to stabilise the child and assess whether it was safe to continue with the planned X-Ray. Students from both disciplines had to work with the parents to promote the family centred care of the child and to relieve parental and child anxiety. The simulation gave students the opportunity to adopt the role of the qualified practitioner in their respective disciplines and work autonomously but in a safe environment.

In addition, the team introduced the role of observer to the learning opportunity: this enabled students to have an opportunity to provide peer feedback on aspects of the scenario that they felt were important. The scenario was followed by structured de-brief using the diamond model to enable students to reflect on their practice and decision making. Student evaluations included the following comments:

“I learned to take a step back and look at the bigger picture and not focus on my role so much and to communicate with other healthcare practitioners.”

“I learned to be calm in a difficult situation”

“To be more confident with my judgement”

“I learned to communicate much more effectively”

“That we can learn vital skills from other professions”

“Learning together is built on trust and communication”

The team would like to send a special thanks to Richard Davies and Kevin Stirling from Laerdal Medical, who both supported and contributed to the creation and running of the Simulation.