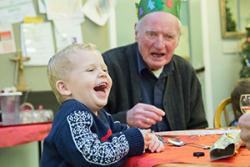 A programme, of which Bangor University was an integral part, has received international praise by reaching the 2018 New York Festivals International Film and Television Awards final.

Hen Blant Bach, a production by Darlun production company is nominated in the Community Portraits category. The series was a new factual format for S4C, and followed the social experiment which brought older people and nursery children together to share their day care.  The programmes documented the transformative positive effects that can be brought about by bringing these two groups together.

Sharing their insights in the programmes were Bangor University psychologist, Dr Catrin Hedd Jones of the School of Healthcare Sciences and Dr Nia Williams of the School of Education, seen on screen, and Prof Bob Woods.

Under the watchful eye of the two psychologists, the viewers received an expert commentary what happens when this age gap is bridged and the resulting positive effects.

Dr Nia Williams of the School of Education commented: 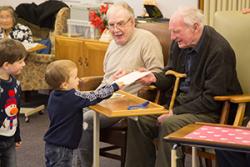 “The nomination is an incredible acknowledgement of the research work and a fantastic opportunity to put Wales and Bangor University on the map.”

The latest series benefitted from support from KESS 2 Scholarship in partnership with Darlun.

“This support has enabled us to conduct research into the effect of the three days on the children, adults and staff who are associated with the establishments. We have appointed a student under the scheme, who is doing a Research Masters funded by KESS 2 and working in conjunction with the television company and the University to develop an intervention while competing a Masters degree by collecting information about the children and adults before and after the week of activities.

Knowledge Economy Skills Scholarships (KESS 2) is a pan-Wales higher level skills initiative led by Bangor University on behalf of the HE sector in Wales. It is part funded by the Welsh Government’s European Social Fund (ESF) convergence programme for West Wales and the Valleys.

S4C's Creative Content Director, Amanda Rees, said: "Congratulations to all the nominees. Three nominations for an international award like this is another feather in S4C's hat and a credit to the talented production companies that we have in Wales.

"Although we focus on nurturing, celebrating and supporting the creative industries in Wales, having the opportunity to raise the profile of S4C, Wales and the Welsh language on an international stage is something very special and is of great pride to us.”

The 2018 New York International Film and Television awards will be held in Las Vegas on 10 April, 2018. 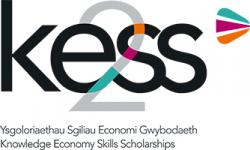