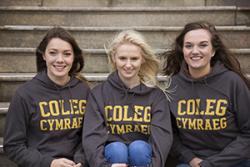 Sioned Everiss, Erin Jones and Sara StockwellThree Bangor University students have been recruited as Ambassadors by the Coleg Cymraeg Cenedlaethol with the aim of encouraging more prospective students to study part of their degree courses through Welsh.

Erin Jones, Sara Stockwell and Sioned Everiss will start this month and be responsible for completing various tasks throughout the year.

Their main role will be to persuade school pupils to follow part of their university studies through Welsh and present the advantages of studying through the language.

They will represent the Coleg Cymraeg at school visits, UCAS fairs and Eisteddfodau as well as record their experiences in a brand new blog.

Llais y Llysgennad will give a snapshot of their lives through pictures, videos and much more.

Sara from Y Felinheli, chose to stay in Bangor after leaving Ysgol Tryfan due to the fact that Chemistry is available to study bilingually at the university:

‘‘Studying the course bilingually means that I can learn and use scientific terms through two languages which will prepare me for the workplace in future.’’

They will have to familiarise themselves with the Coleg Cymraeg Undergraduate Scholarship Scheme and speak about the advantage of receiving a scholarship, as Erin from Y Bontnewydd, who studied at Ysgol Syr Hugh Owen before studying Adult Nursing at Bangor University explains:

‘‘Because I have received a scholarship, I will be able to speak to perspective students about the process and persuade them to apply. Being an ambassador will be a great opportunity to emphasise that Welsh language higher education is worthwhile and help pupils make the right choice.’’

Sioned from Llangernyw who’s studying Criminology, Criminal Justice and Sociology after leaving Ysgol Dyffryn Conwy, hopes to ease any worries pupils may have about studying through Welsh at higher education level:

‘‘The Welsh medium classes are smaller on average which means that a better relationship exists between students and lecturers. There is no need to worry, everybody’s in the same situation so go for it and enjoy!’’

The Coleg Cymraeg blog can be found here.