This article by Rhi Willmot, PhD Researcher in Behavioural and Positive Psychology, Bangor University was originally published on The Conversation. Read the original article.

My friend, Joe Weghofer, is a keen surfer, so when he was told he’d never walk again, following a 20ft spine-shattering fall, it was just about the worst news he could have received. Yet, a month later, Joe managed to stand. A further month, and he was walking. Several years on, he is back in the water, a board beneath his feet. Joe has what people in the field of positive psychology call “grit”, and I believe surfing helped him develop this trait. 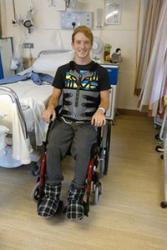 Joe shortly after his accident. : Rhi Willmot, Author providedGrit describes the ability to persevere with long-term goals, sustaining interest and energy over months or years. For Joe, this meant struggling through arduous physiotherapy exercises and remaining engaged and hopeful throughout his recovery.

Research also suggests that grit can be learned. Certain conditions can foster grit, allowing grit developed in one domain to transfer to other, more challenging, situations. Surfing is a good example of how grit can be gently cultivated, strengthened and then honed. So although getting back in the water itself was important to Joe, his previous surfing experience may well have developed his ability to persevere long before he became injured. Here’s how:

Gritty people have a strong appreciation of the connection between hard work and reward. In contrast to simply running onto a hockey pitch, or diving into a pool, surfing is unique in that you have to battle through the white water at the shoreline before you can even begin to enjoy the feeling of sliding down a glassy, green wave. This is difficult, but the adrenaline rush of riding a wave is worth the cost of paddling out.

The theory of learned industriousness suggests that pairing effort and reward doesn’t just reinforce behaviour but also makes the very sensation of effort rewarding in itself. Repeated cycles of paddling out and surfing in are particularly effective at developing an association between intense effort and potent reward. This is especially relevant given that grit is described as a combination of effort and enjoyment. Gritty people don’t just slave away, they eagerly chase difficult goals in a ferocious pursuit of success. 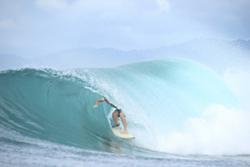 Joe, enjoying the activity that made him who he is. : Rhi Willmot, Author providedPassion

Surfers’ passion for their sport is well known – it may even be described as an addiction. One of the properties that makes surfing so addictive is its unpredictability.

The ocean is a constantly changing environment, making it difficult to know exactly when and where the next wave is about to break. This means watery reinforcement is delivered on something called a variable-interval schedule; any number of quality waves might arrive at any point in a given time frame. Importantly, we receive a stronger release of the motivating neurotransmitter dopamine when a reward is unexpected. So when a surfer is surprised by the next perfect wave, dopamine-sensitive pleasure centres in the brain become all the more stimulated.

Behaviour that is trained under a variable-interval schedule is much more likely to be maintained than behaviour that is rewarded more consistently, making surfers better able to persevere when the waves take a long time to materialise.

The final grit-honing element of surfing is its ability to provide a sense of purpose. Feeling purposeful – a state psychologists describe as a belief that life is meaningful and worthwhile – involves doing things that take us closer to our important goals. It usually means acting in line with our values and being part of something bigger than ourselves. This could refer to religious practice, connecting to nature or simply helping other people.

Research suggests that as levels of grit increase, so does a sense of purpose. But this doesn’t mean that gritty people are saints – just that they have an awareness of how their activities connect to a cause beyond themselves, as well as their own deeply held values.

The physical and mental challenge offered by surfing provides a sense of personal fulfilment. It’s always possible to paddle faster, ride for longer or try the next manoeuvre, but spending time waiting for the next wave also provides a valuable opportunity to reflect.

The ocean is a powerful beast. Serenity can quickly be replaced with chaos when an indomitable set of waves arrives, five-foot-high walls of water, stacked one after the other. Witnessing the power of nature in this way can certainly deliver a sense of perspective, helping you to feel connected to something meaningful and awe inspiring.

Of course, surfing isn’t the only way to build grit. The important lesson here is that developing our passion and identifying our purpose can help us persevere with the activities we love. This provides a valuable reservoir of strength, to be used when we need it the most. And while coming back from such a serious injury requires more than just grit, Joe’s persistent effort and unwillingness to give in have undoubtedly helped him to once again enjoy the sport that made him who he is.