A Bangor University lecturer has been awarded a prestigious title for her contribution to community nursing. 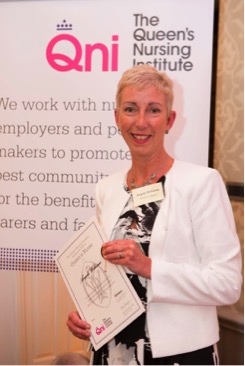 Angela Williams, a Lecturer in Nursing and Midwifery at Bangor’s Wrexham campus, was one of 126 nurses from across the country to receive the Queen’s Nurse Title as part of The Queen’s Nursing Institute’s (QNI) Spring Awards ceremony, which took place in London last month.

The award, presented by Jane Cummings, the Chief Nursing Officer in England, recognises the impact that nurses have on learning, leadership and service development in communities across the country.  In order to become a Queen’s Nurse, individuals must be committed to high standards of care in their community, besides acting as leaders and role models to their colleagues.  The award winners were also welcomed by Dr Crystal Oldman, the Institute’s Chief Executive and by Kate Billingham CBE, Chair of the QNI’s Council.

Angela, who has lectured at the university since March 2014, was formerly a health visitor in the Wrexham area, and is delighted to have been appointed a Queen’s Nurse, being the only Bangor academic staff member to receive the award this year. She said: ‘’I was very proud to receive the 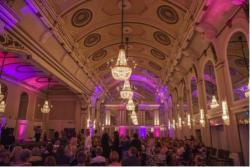 The Grand Connaught Rooms in London where the celebration took place. Photograph: Kate Stanworth. title of Queen’s nurse. I have spent many of my qualified nursing years working in the community setting. Working in the community has been a big part of my life, and to be recognised for this was truly rewarding. I believe in the values of the Queen’s Nursing Institute, which focuses on the development of community nursing and keeping the patient at the centre of care. I was glad to be present at the award ceremony representing north Wales.’’

The award is further evidence of the high quality Nursing Education Bangor University provides at both its Wrexham and Bangor Campuses, building on recent league table successes which saw Bangor ranked 3rd in UK in the Complete University Guide. A recent increase in funding from the Welsh Governments funding body means means that nursing places are still available for September 2016 and March 2017 intakes.