Getting Welsh GPs to act more quickly on cancer symptoms 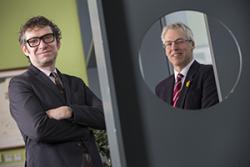 Cancer Research Wales, a Welsh cancer charity solely dedicated to research, has committed the money to two projects set to have a direct impact on patients in Wales. One of the awards will help fund research into immunotherapy treatment for patients with bowel cancer. These new therapies, which are amongst some of the biggest breakthroughs in the treatment of cancer in recent years, are being developed to harness the power of the patient’s own immune system to tackle cancers in the body.

Bowel cancer is the second leading cause of death from cancer in Wales with almost 1000 patients dying from the disease every year.

Based at University Hospital Wales Professor Andrew Godkin and his team, the recipients of this Cancer Research Wales award, were the first in Wales to conduct a clinical trial that utilised a cancer vaccine for the treatment of a solid cancer. Importantly, this innovative programme of research will seek to discover and develop new and more effective forms of immunotherapy for the treatment of bowel cancer. In addition it will also provide a unique platform from which novel and diagnostic screening tests for bowel cancer in both cancer patients and healthy subjects can be designed.

The second project receiving funding will look at early cancer diagnosis - a priority area for the Welsh Government, as late presentation of cancer is thought to significantly contribute to the relatively poor survival of Welsh cancer patients compared to the rest of the UK.  The award had been made to Professor Richard Neal from Bangor University's North Wales Centre for Primary Care Research, himself a practicing G.P and a world-leader in the field of early cancer diagnosis.

Earlier cancer diagnosis leads to better survival as cancers are detected at a stage when they are easier to manage, treat and cure. Professor Neal has been instrumental in guiding the Welsh arm of the International Cancer Benchmarking Partnership, providing insight into all aspects of cancer, including epidemiology and survival; population awareness and beliefs; beliefs, behaviours and systems in primary care. Cancer Research Wales already supports module 4 of this important global study, which is looking at the root causes of delays in cancer diagnosis and treatment within the Welsh Healthcare system.

However, with the new funding Professor Neal and his team will develop and evaluate ways of getting Welsh GPs to act more quickly on cancer symptoms for more accurate and earlier diagnosis of cancer. It is hoped this research will promote the faster referral of suspected cancer cases.

Founded in 1966 by a small group of professors based at Velindre Hospital in Cardiff, Cancer Research Wales has since grown to become a major force in the discovery of new precision treatments for cancer, early diagnosis and progress towards cures.

The charity is heavily supported by ordinary people from across Wales, via legacies, incredible fundraising challenges, donations and charity shop purchases. Every donation made to Cancer Research Wales goes straight to the teams of leading, world-class scientists based in Wales, for the benefit of cancer patients everywhere.

Speaking about this week’s announcement of new funding, Liz Andrews, Cancer Research Wales Charity Director said: “I am delighted to be able to celebrate our 50th anniversary by pledging a further £1.6m to exciting research projects underway right here in Wales. This is money that has been directly raised by the people of Wales through their commitment to fundraising and volunteering, or by generous donations and legacies. Now they will see the impact their money can have in the fight against cancer, both at the stage of diagnosis and primary care and in the form of developing new treatments for a disease that affects so many here in Wales.”